We got home and got busy with the holiday season--almost forgot the trip summary. Merry Christmas, everyone! 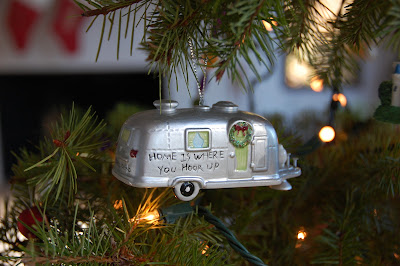 Days: 40
Camping fees: $26.14 average. Not bad, thanks to our families and their driveways (plus one night free at the Oklahoma casino).
Fuel economy: 15.23 mpg. Very similar driving conditions as our spring trip this year—lots o’ wind.
Number of states: 19, with 8 new state stickers added to our US map on the back of Rocksie.
Time zone changes: Nine, count ‘em, nine times. Between time zones and the end of daylight savings time, we kept busy changing clocks and watches
Closest call: Missing the deer by a hair at Mammoth Cave, Kentucky. Followed closely by missing the tornadoes in Turkey Run State Park, Indiana.
Weather: Knowing that we were heading out during the season change, we packed shorts and tees along with sweaters, rain gear, and mittens. Good thing because we wore them all. We were in a tornado watch (temp dropped from 69 to 35 in just a few hours), wintry mix, high wind advisories, but mostly bright warm sun shining on gorgeous fall leaves.
Most brain bending trip ever: This trip not only had us change time zones and states all the time, but also cultural and geographic and social lines. We got down-home in Maryland and Alabama and Georgia, but also upscale in South Carolina and Indianapolis. We went to very serious places—the Supreme Court and the Carter Center—but we also laughed at the Rally to Restore Sanity, marveled at Graceland the International Spy Museum, and had a total blast at the Wizarding World of Harry Potter. We were in the Southwest, the Midwest, the Tide Water region, and the Deep South.
Family visits: This trip took the cake. We visited all immediate family on both sides, except for our Louisiana branch of the family—18 in all.
Notable grub: The crab cakes at Crabs to Go, fried hamburger at The Tune Inn in DC, the ribs at Fat Matt’s in Atlanta, the vinegar pulled pork in NC, and the pork tenderloin from the Pana bowling alley. Oh, and the mustard-based SC BBQ sauce we brought home is STILL good on top of turkey.
Such diversity of taste sensations. The 4 pounds I gained on this trip are finally off again. (A big downside to not taking the dog—not as may walks.)
Best surprise stop of the trip: Assateague National Seashore. We hadn’t planned to go there, but just “swung by” spur of the moment.
Most captivating stop: Charleston, SC. We’ve heard the stories, but seeing is believing. Beautiful place.
Most disappointing: South of the Border. Pedro was just more impressive back in the day….
Maintenance: We had a few maintenance issues—low tires (thank goodness we carry a compressor now), had to add 3 quarts of oil at various points, and we lost a headlamp (and some interior lights).
More frustrating was when the TV antenna got stuck in the up position. We finally lowered it as far as we could and drove to our destination. We found a really great guy in Pana, IL, who showed us what went wrong and fixed it in 30 seconds for free and showed us how to do it ourselves in the future. (Of course, he knows my brother. Everybody knows my gregarious brother in that small town ;-)
Our major issue was a sudden loss of power while driving in the-middle-of-nowhere Arizona on a 75 mph freeway. It’s a bit scary to be dropping to 45 mph while the 18-wheelers are blowing past. We were so lucky that it happened right before the big pull up to Flagstaff and near the only open rest area in Arizona. We pulled in to turn off the engine, which often resets the computer. While we were waiting, we checked the oil (1 quart low, so we added). We stared rather helplessly at the hoses to see if something had come loose around the transmission. Nothing. So we started to leave.
We got just a few yards when the check engine light came on. We called Coach-Net and created an action plan. Because two other German-engineered vehicles we had owned lost power when given “bad gas,” we suspected that maybe we had gotten the bad diesel at our last fuel stop. Maybe it had water in it. We were sure that it was diesel, not gas (in case you’re wondering), but Rocksie did try to spit it out. (Fuel sprayed everywhere.)
So we nervously drove 2 miles to where we knew a fuel station was (the only one for many miles)—the place we stayed earlier this year: Meteor Crater.  The check engine light stayed on all the way to Kingman, but the mechanic said that as long as it’s a solid orange (not flashing, not red) and as long as we had power we were good to drive. So we did. Put in another ½ tank in Kingman and, voila, the light went out. Correct diagnosis! So glad we didn’t chicken out and trek down to a dealer in Phoenix.
Mods: Got some gadgets to help make life inside the coach much smoother. What a pleasure it is now to not have to secure tissue boxes and soap dispensers each time we get under way. Thank you, Nashville Camping World!
Passage of Time: While camping in the RV, we got to see, It’s the Great Pumpkin, Charlie Brown; A Charlie Brown Thanksgiving AND the 1964 classic, Rudolph the Red-Nosed Reindeer. Holidays and seasons came and went on this fantastic trip.
3 comments: Links to this post

Carmel Valley, California, United States
This blog is the travel journal of Julie & Lisa, a middle-aged married couple from California. It started out as an unedited, spontaneous, in-the-moment record of our adventures on the road in our Itasca Navion 2009 J named Rocksie Candu, but has since morphed into an online trip summary/memory jogger for us. I have to say that I definitely use Facebook much more for the spontaneous, in-the-moment commentary and photos because so often we don't have time/inclination/connectivity to write long blog posts on the road. Much easier to type in a micro blog using my phone while heading down the road....